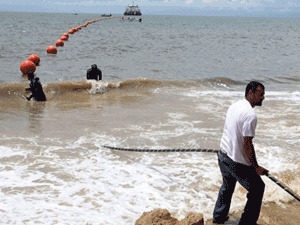 In Africa, fixed-line operators are considered dead in the water. Mobile took over and flourished, meaning that fixed-line was essentially written off – operators struggle to stay relevant with 100,000 subscribers in countries with populations of 20 million people. While many have looked to privatisation, there are still opportunities for a huge number of African fixed-line operators due to one key factor – many have exclusivity on the national backbone.

Managing the fibre backbone puts fixed-line operators in the driver’s seat. There are many opportunities for companies to accrue revenue via fibre; IPTV is a notable example, with television services restricted to major cities across much of Africa. Using their fibre networks, operators could partner with the national television broadcasters to offer services across the country.

Nationwide fibre would also allow for the replacement of dial-up internet and the provision of high-speed broadband, particularly to institutions such as schools and hospitals, at a far lower cost than via satellite. In addition, fibre operators would have the opportunity to sell capacity to mobile operators.

“With a lot of countries bordered on the sea, where the fibre’s coming in, they can sell capacity to neighbouring countries. Cameroon’s a good example – there’s fibre coming in there, it can sell to Gabon, Chad, Central African Republic – all the other surrounding countries can tap into that network which gives the operator extra revenue”, says David O'Reilly, Sales Director for Africa at FTS.

In Cameroon, there are 2600km of fibre infrastructure, and it’s the same in many African countries – this allows the fibre operators to reach previously unconnected rural parts of the country, which is a major revenue stream. Many fixed-line operators also run a GSM or – more commonly – a CDMA operation, and the extended fibre infrastructure allows them to extend these services as well.

All the fibre will go through the fixed-line operator’s billing system; it works similarly to an interconnect service, with the surrounding countries billed for what they use. The main issue facing Africa at the moment is the management of the fibre, which is not as good as it could be – for example, when fibre landed in East Africa people were expecting very low rates for broadband, but this failed to materialise.

The issue is bad management. “Countries need to create a separate company just for managing the fibre. It needs to be that company’s job to sell and market all the services that fibre can bring, including selling capacity to surrounding countries”, says O’Reilly.

Therefore, the model needs to consist of an operator to manage the network, and a management firm to sell the services. However, this is far from commonplace, with scant few countries adopting it – having spent millions of dollars on deploying fibre, many countries have now reached a bottleneck and aren’t aware of what the next steps should be.

O’Reilly stands firm with the belief that the correct move is for operators to create a management company for their fibre services. “Nothing is happening with fibre – it’s coming into the country, it’s being controlled by the national operator, but not in a way which will get revenue for the company. The opportunities are huge, but only if it’s managed properly.”

Boosting revenue through better management requires working from the bottom up. Fibre billing is far more complex than voice billing, so the first step is to ensure that their system can handle it, and the second is to maximise opportunities for revenue –this may involve looking outside of their own organisation. The third step is to create what is essentially a sales and marketing company to sell services – this could create many revenue opportunities, but it must be managed properly.

Fibre is essentially a national asset, argues O’Reilly, which is relinquished through privatisation. “If it’s sold off cheaply to a foreign company, then whatever revenues come from that are taken out of the country”, he says. “A lot of infrastructure is in place – with minimal investment, they can move forward without privatisation.”

He points to the example of Cameroon, which is no longer attempting to privatise its national operator Camtel – and the firm has become something of a hub in West Africa, having grown its business through fibre. “If they want to sell, they can do it in five year’s time – why not grow the company first from a 100 million-dollar firm to a billion-dollar firm?”