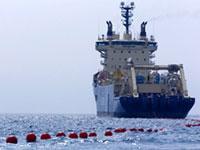 New submarine cables being laid along the east coast of Africa will bring unprecedented connectivity options and related business opportunities to the region. According to a recent IDC study, four different cable projects will alleviate East Africa's dependence on expensive satellite broadband which has so far contributed to scarcities in communications, education and market opportunities. However, although the laying of the first cable by mid-2009 will immediately increase broadband availability, substantial price drops may only occur once additional cables provide competition.
"Governments in the region hope to use the new capacity to transform their economies. Land infrastructure projects abound as governments lay cable to bring capacity in from the coast, an especially important project for landlocked nations," said Francis Hook, Regional Manager, IDC East Africa, and the author of the study. "Some governments are also stockpiling business capacity: for example, Kenya is already subsidising communications costs for Business Process Outsourcing (BPO) providers and establishing a BPO zone, ensuring that there will be a supply of labour in place once cheaper and more reliable broadband arrives."
Besides the highly anticipated 2010 FIFA World Cup to be held in South Africa, operators and governments across the area are being driven to participate in the opportunities this impending shift in Internet availability will bring: for example, a variety of new business models and acceleration of East Africa's integration into the global economy, among other changes.
BPO is one such business model. "Several countries in the region have fledgling BPO industries that take advantage of lower competition for educated workers than in the overheated Indian outsourcing market," said Hook. "While India obviously has far greater scale, countries such as Kenya or Uganda offer enough educated, English-speaking workers to appeal to medium-sized enterprises that would like to capture dedicated capacity by being the first to move into this region. Some stakeholders in cable projects also have outsourcing divisions in India, and are likely preparing to apply this expertise in East Africa."
Submarine Internet cables: the race to connect East Africa (IDC #ZW14Q, September 2008) not only describes the subsea Internet cables that will replace expensive satellite broadband in East Africa but also speculates on the probable winners of the cable-laying race, describes several likely consequences of the upcoming flood of inexpensive broadband, and identifies the cable stakeholders most likely to benefit.